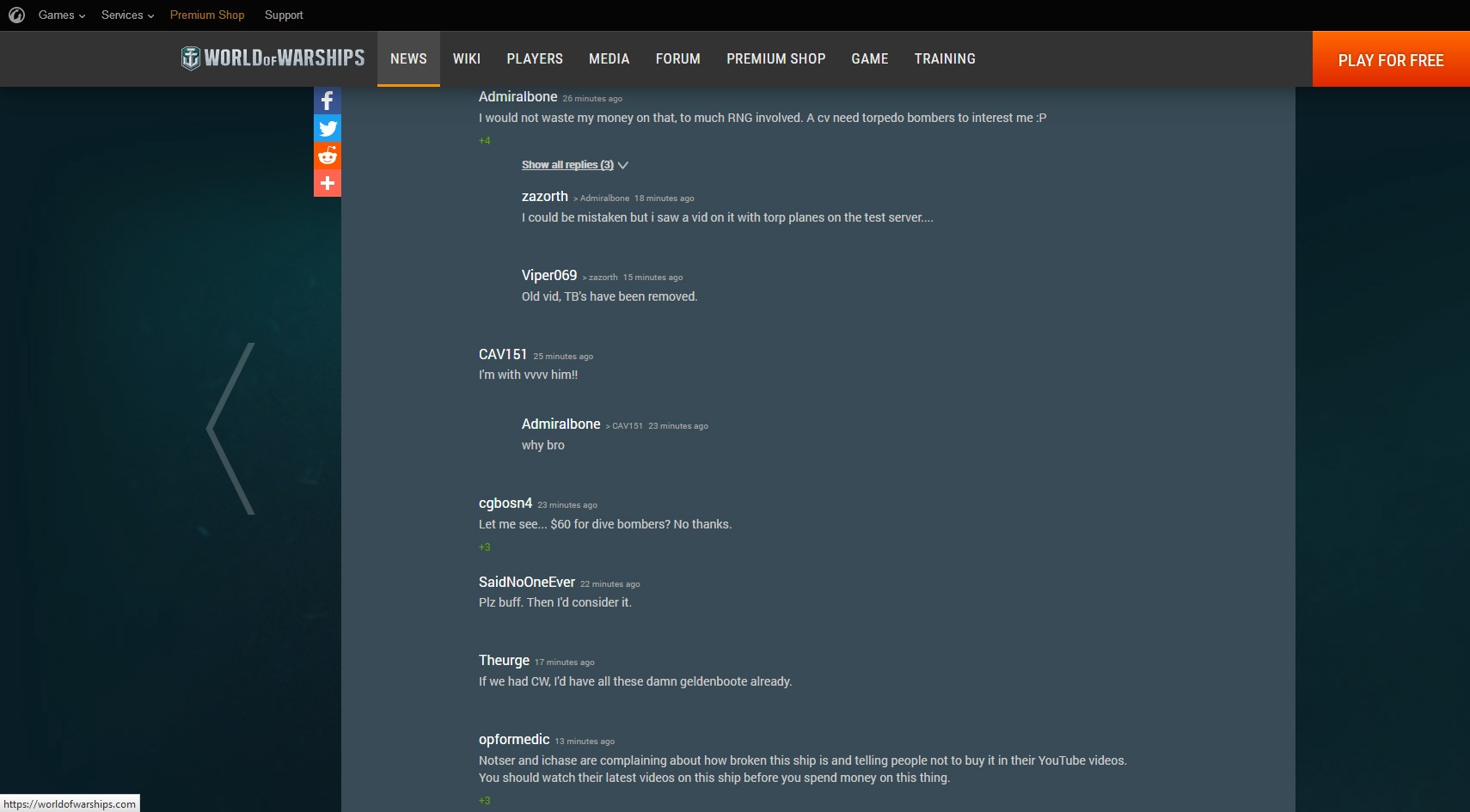 Well folks, here we are again – another day in the life of the bullshit that is Wargaming. Every time we post an article, we keep thinking, “what else can they possibly do to top this?

Today, we found out. Say hello to the most desperate money grab we have ever seen from Wargaming: The Graf Zeppelin.

Now, the Zeppelin has been in the works (rumor wise) for quite some time. It was thought that it would be a fine, T8 torpedo based premium carrier that would bring the Germans into the fray in carrier based conflicts.

Now, we’ll freely admit we are no experts on World of Warships. That’s not our cup of tea. We have in fact only two people that hang out here that even play it: Mr. Alex and Gomez Adams. That said, Alex actually commented on this ship a few times: that it was going to be a disaster, that they took the torpedo bombers off it and quickly, and completely without testing it, swapped them out for dive bombers with disastrous effect.

So this morning, we checked it out. Turns out, Mr. Alex was completely correct. Here’s the announcement of the ship:

So we click on that to find out what it’s all about and find this:

60 fucking dollars?! Holy shit!!! This thing must come with a free bottle of Jack Daniel’s, a couple lines of cocaine and a hooker to be named later!

It is the most expensive ship Wargaming has ever sold. It is also one of the absolute worst. How do we know this when we’ve freely admitted to not knowing that much about Warships? Simple: everybody else that has posted anything about this ship says so. Take a look at the comments right below the pricing:

What’s more, the lead ship reviewer on the World of Warships site, Little White Mouse, had this to say about it:

You’re not getting a full review of Graf Zeppelin — not at this stage. This ship isn’t ready and it’s an insult to the player base that Wargaming did not have the courage to admit that. Players there are being asked to fork out the equivalent of 13,500 doubloon to own this piece of garbage. If you ever wanted to know what it was like to play test an unfinished ship, now’s your chance. Wargaming is demanding that players pay for the privilege and the going rate isn’t cheap. I can’t promise you that the ship you’ll be paying for will be any good when they finally get around to finishing it. Graf Zeppelin has had a very troubled development history and I do not have confidence that they can patch this ship to make it an enjoyable or compelling choice for players based on the design decisions so far implemented.

Currently, her AP Bomb drop mechanics are unplayable. There’s no UI feedback explaining the 6 second bomb-delay. A player would feel rightly justified in believing that their system was lagging each time they attempted to launch an attack. The Stukas are well on their way to returning to the ship by the time the explosions finally come. Her HE bombs do work. However, the game play being offered up is the equivalent of that of a gimped Air Superiority Lexington. Her Bf-109T fighters are scarcely better than Enterprise’s tier VII Hellcats but without the necessary reserves to out-muscle her opponents like the American premium. This doesn’t make for very compelling game play.

So one half of Graf Zeppelin’s armament choice doesn’t work. The other half is functional but mediocre at best. Any form of in-depth analysis is just not worth my time at this stage. I will not humour Wargaming by treating this like a finished product. Players are being asked to foot the bill for this ship’s troubled development history. In my opinion, apologies should be made. Refunds should be freely issued when asked for. The ship needs to be pulled and sent back into testing. It’s not ready yet. We’re very lucky that this wasn’t simultaneously released on the NA server.

I urge players to keep their wallets closed.

And then this from Lert, another community contributor:

Basically, according to this developer post in response to the whole issue;

If the ship was fine, they wouldn’t be needing to add other features to it, and how can the ship be finished if some of its intended features are still under development.

Wow. I mean just fucking wow. Their main guide writer says it’s shit on their own forum and another community contributor essentially says the same thing. What’s more, it’s got 233 up votes already and that is growing at an alarming rate.

This is what happens when you give up. This, folks, is the 2nd sign of the appocalypse: When there is NO REASON to release a complete piece of shit, yet you do it anyway knowing FULL WELL you’re going to catch hell for it, then you put the BIGGEST PRICE TAG YOU’VE EVER PUT ON A SHIP ON IT, then only one thing is certain:

YOU ARE FUCKING DESPERATE FOR CASH.

Yet another classless display on Wargaming’s part. What’s more, they don’t give a shit. If they did they would never have released it to begin with. What’s more, they would have made it the same price they made other T8 ships: the mid 50’s. By comparison, the Saipan (an American T7 premium carrier) which is a superior ship cost 43 dollars…a WHOPPING 17 dollars less.

What the actual, ever-loving fuck were they thinking?!

Money. That’s what they’re thinking. That’s all their thinking. It’s all they’ve been thinking for a long, long time. But now, it’s different. Now, it’s desperation – literally hurling absolute shit into the game because they simply no longer have the time or manpower to do things right anymore.

Putin grabs the U.S. by the pussy.