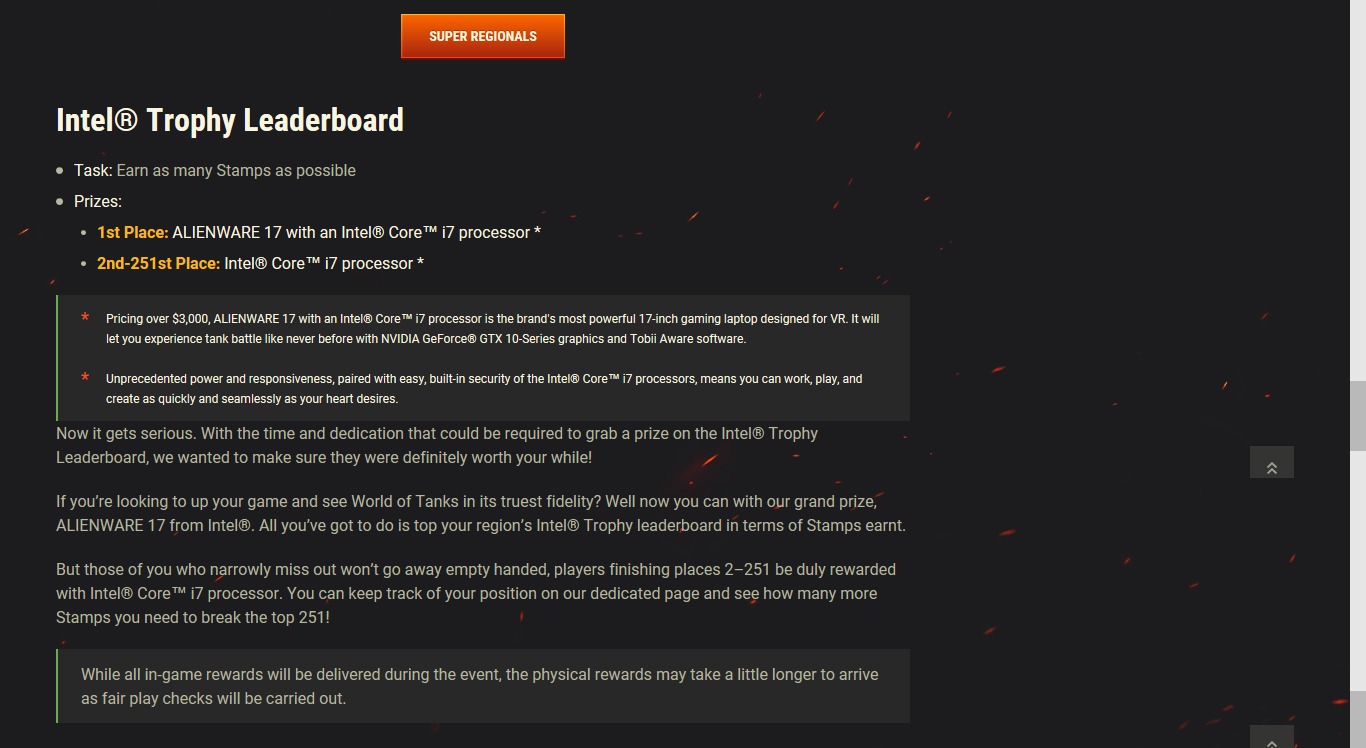 Well folks, another day another outright fraud committed by Wargaming North America. This one comes to us via our Facebook page from a player named  Borsao and is available in it’s original form on Reddit.

Now, this all started back with the 1.0 Grand Extravaganza contest back in March.

The premise is pretty straight forward: you do shit, you get prizes. The one we’re concerned with today is this one:

So our man Borsao, like many others, put his game face on, grabbed a 12 pack of Code Red Mountain Dew, and got after it.

And he did it by finishing in 126th place:

So at that point, it was (or SHOULD have been) academic. You use the information of the player in your database to contact the player, get his or her information, and send them their prize.

So simple a child could do it, right?

Yes. But this is Wargaming we’re talking about, so it’s never what it seems.

So Borsao fills out the form with his shipping information and waits.

He never gets a fucking thing. So then, he contacts Wargaming Support – which from this point forward will be referred to as Wargaming Fraud Central.

Hello there. According to the 1.0 Grand Extravaganza leaderboard, I was one of the winners of the Intel processors and filled out page to have it shipped to me.

https://wotonereward.com/?utm_source=portal&utm_medium=wg_sites&utm_campaign=news This shows me (Borsao) at 126th. I have not received the processor and was wondering if there was a problem.

My name & shipping address is:

Any help is appreciated. Thank you in advance

That was sent to Wargaming Fraud Central. It takes them an entire week to respond with this:

Thank you for contacting Wargaming Support, I apologize for the delayed response.

Since we do not want you to go empty handed I have spoken with our leadership team and have received approval for alternative prizing. Please select any three of the following tanks to be credited to your account:

Please let us know once you have made your selection and we will be certain to credit these tanks immediately.

So wait just a fucking minute here: You were SUPPOSED to ship him a 350 dollar processor, but since you failed to do that you’re going to offer him HALF THAT VALUE IN PIXEL TANKS?!?!

ARE YOU FUCKING KIDDING ME?!?!

Kevin I’m currently on vacation and can’t look at my chat logs in game. I did receive a message from one of the three coordinators in game and immediately responded and went to the site to fill in all the pertinent information needed to collect my prize before the May 25 deadline. I will get the information to you on Friday when I get back to my computer.

Actually, since you can see our chat logs. Simply check out the conversation between 1984BigBrother [WGA] and Borsao May 10 2018.

So right there he has the proof he told them about it. He knows the fucking guys name he talked to, the day the conversation took place, and it all went down WEEKS before the fucking deadline.

What kills me as well is that Borsao doesn’t even really bitch about the fact that what he is being offered has NO VALUE AT ALL but even if you wanted to put a value to it, it would be LESS THAN HALF OF WHAT HE SHOULD HAVE RECEIVED.

Thank you for letting me know about the exchange between yourself and 1984BigBrother on 05/23. I can see that you received the link and that you said that you put your information in on that day which means that it should have gone to Intel that week.

I will reach out to our event coordinator with these logs and with your shipping information that you have provided here to see what we can do for you. I will let you know as soon as I have heard back from the coordinator but please note that as they are in the CIS region it may take some time for me to receive a response.

Until I can get an answer for you I will be placing your ticket on hold.

So he flat out calls Borsao a fucking liar!!!

Thank you for your patience in this matter, I apologize for the extreme delay.

With the evidence you gave we began an investigation into your Intel Rewards trophy form. We have spent the last several days speaking first with our event coordinator and then our contacts in Intel but unfortunately in all of our data pulls your trophy form does not appear before May 25th. I am terribly sorry but at this time we have exhausted all options for getting you the processor reward.

If you are interested in the alternative prizing, please let me know. You can choose up to three of the following tanks:

Again, I regret that we were unable to secure the physical prizing for you, but I hope you have a good evening.

Yeah. Gonna call MASSIVE BULLSHIT on that. We’re of the opinion that they sent them out to the FEW people they WANTED TO who they DEEMED WORTHY of getting them.

The rest were probably sold on Ebay and the cash pocketed by the employees and their buddies. After all, whose to argue with them, right? All they have to do is bury your fucking ticket and you’re done.

Kevin, I meant to ask, as you can see from my account, I collect the Chinese tanks. Any possibility I could get one of those as a Type 59 for my collection? Its the only one I’m missing and my efforts at the contests have proven fruitless.

I guess the Lorr 40t, T54m1 and if possible, the REGULAR T26E5 (not the patriot) that way I can at least get the gold equivalent for the the three.

So after all this bullshit, the only thing Borsao is asking for is a fucking Type 59. That’s it. You give him that and he’s all good.

So what does Wargaming Fraud Central have to say about that request?

Thanks for getting back to us.

It is with your deepest regrets to let you know that we can’t grant your request to give the Type 59 as part of this. I understand that she is a rare tank and would complete your collection for acquiring her, but she can only be obtained from our official competitions/tournaments as of this moment.

We could, however, give you the following vehicles to help you out:

We look forward to your reply, Commander.

Have a great day!

First off, learn to speak English you fucking half-wit. Secondly, ARE YOU FUCKING KIDDING ME!?!? YOU GAVE THE FUCKING THING AWAY IN BOXES JUST A FEW MONTHS BACK YOU SHIT-FOR-BRAINS MOTHER-FUCKER!!!

This takes us back to the fucking fraud. Why wouldn’t they REALLY give him the Type 59?

Borsao, after all this bullshit, simply wanted the gold value. That was it. He was over it. Just give him the gold equivalent on his account and he’ll move on.

That’s not asking too much is it?

Thank you for your reply.

Thank you again for all of your patience in this matter, and I hope you have a great day.

So they won’t even give him the fucking gold for it.

OK, folks, here is where the shit gets thick. I’m going to all cap this shit so you can read it without having to strain:

WARGAMING OFFERED A REAL WORLD PRIZE. WHEN THAT REAL WORLD PRIZE WAS WON, THEY REFUSED TO SHIP IT EVEN THOUGH THEY KNEW THE WINNER WAS LEGITIMATE AND KNEW HIS SHIPPING INFORMATION AND KNEW HE HAD TALKED WITH OFFICIAL WARGAMING PERSONNEL WEEKS BEFORE THE DEADLINE.

AFTER REFUSING TO SHIP HIM THE REAL WORLD PRIZE HE WON, THEY REFUSE TO OFFER ANYTHING REAL WORLD IN RELIEF AND SWITCH HIM OVER TO FAKE CREDITS THAT HE CAN’T EVEN BUY PREMIUM CONSUMABLES WITH.

If that isn’t the most blatant, wanton case of outright fraud you’ve ever seen, then you’re as blind as a fucking bat.

It just can’t get any worse than that, can it?

After reading about all of this we took the liberty of contacting a lot of the “winners” in that list. We’ve heard back from 7 of them already.

EVERY LAST ONE OF THEM WENT THROUGH THE SAME EXACT THING. NOBODY GOT THE PROCESSOR THAT WE KNOW OF YET.

Can you believe this mother-fucking shit?